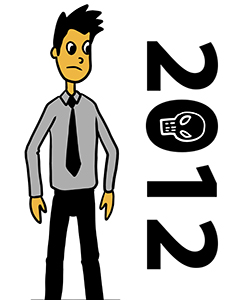 Actually, it goes one better than that – you have to have the equipment installed / put into use by then. So just “buying” the equipment isn’t enough – it has to be operational. This means (for example) a New Year’s Eve purchase of a new storage building with a Jan 2 delivery date won’t count. You need to get them to deliver it and get it ready to go by the stroke of 12.

In re-reading the above, it almost sounds like a harsh deadline – e.g., “do it by the stroke of midnight”. But really, it’s fair – we’ve had all year to take advantage of Section 179 and the higher rates 2012 offers. It’s just we’re nearing the end of the year, and time is running out.

So why is this year so important? Well, because Section 179 seems to be shrinking. A few years ago, we were enjoying fat deductions of 500k. But this year, the maximum allowable deduction is only $125k. That’s a large drop, isn’t it?

But if you think that’s bad, wait until next year, when it drops to a mere $25k. Ouch. And while I’m always hopeful for a midyear boost (which HAS happened before), the past few years of “shrinking” suggest perhaps the government isn’t comfortable with really high deductions for new equipment purchases.

So to take real advantage of Section 179, get in NOW. Unless, of course, you think the world is ending on 12/21/2012. If you think that, I would say “don’t bother”, and instead spend the money on a huge party. And make sure you invite me.