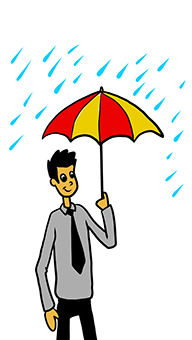 Ok, so it rained a lot last month. Which really wouldn’t bother me so much except that, in the middle of it all, those unmistakable “the roof is leaking” spots appeared on my bedroom ceiling. Ugh…

To be honest, though, it wasn’t unexpected. The roof on our house is 17 years old (we think – we weren’t here when it was last replaced), and we knew we’d have to replace it soon. But even when you sort of expect it, it’s still a surprise when it happens. Funny how that works.

Anyway, we’re prepared – in fact, we’re more than prepared. We had been saving to move over the past few years, but last year really decided we liked it here a lot. So the money we’ve been saving to move will go back into our house. Which we think is a smart financial move (you knew I’d start talking finances soon, right? Equipment financing talk coming up, too.)

So we get the contractor to come over, and he gives us an estimate for the roof, and new siding as well (we’ll do our part to help the economy.) The estimates came out lower than expected, so tack on a new bathroom too (making Mrs. Fletcher very happy indeed.)

During all of this, I start talking “economy” with the contractor, and I find out he’s pretty busy – in fact, he’s expanded his business this year. Smart marketing and the good old “do the best work in town” thing have really helped his business. We talked about his expansion, and it pleased me to hear what he had to say, because it fit right in with the equipment financing that I do.

In short, my contractor put three new crews on the road, and also upgraded the four he already had. By upgrading I mean some new tools, including several very expensive generators, which he financed through – wait for it – an equipment financing company (not mine, but that’s ok – it just pleased me that he thought to finance generators through someone other than the bank.)

This is noteworthy to me because this is something I stress – equipment financing is not just for huge corporations – it’s also for small and medium sized businesses. Yea, we’re not going to finance one drill, but financing several commercial generators? Yea, we’ll do that. In fact, most equipment finance companies will finance construction equipment, provided it’s something worth financing (generators and the like).

Ok, till next time, stay dry!