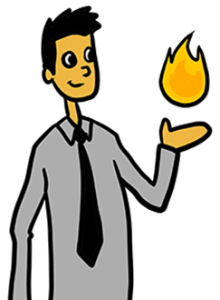 Every year or so, I do a “what’s hot in equipment financing” post, typically followed by a “what’s not so hot in the world of financed equipment”. And in these posts, I highlight industries that are rising / falling, based on what I see in equipment lease applications.

This year will be a bit different. Because right now, it’s *all* hot. Even industries that typically fall in my “not” column (retail, offset printing, publishing, etc.) are as strong as they’ve been in a long time. Again, as a caveat, this is going by the credit applications that cross my desk – Fletch is not an economist.

But really, it has been this way since the election. And I mean, the very next day, things took a noticeable spike upwards.

So what happened? Well, I’m loath to discuss politics here, and I know there are strong feelings on both sides, but I will say this uptick, in my opinion, is generally attributed to small business casting a vote for fewer regulations. There’s a definite perception that one political party seeks to increase regulations, and one party seeks to reduce them. I am not saying this is true – I *am* saying that’s the perception. And it doesn’t take a rocket scientist to figure that out.

I personally know some small businesses that were dumbfounded at the amount of paperwork something like the Affordable Care Act generated. Again, this observation isn’t an endorsement or condemnation of the act itself or the larger question regarding the need for healthcare reform – it’s simply hearing from the small businessperson about having a mountain of paperwork. One landscaping / snow removal customer told me about how he had to pay his crew differently for winter snowstorms due to hours reporting – variables like storm strength and how long his crew was out clearing it were negatively impacted by the ACA, adding a complicated layer to his operation.

So to me, this uptick was about businesses feeling like they will be a little less constrained over the next four years. However that works out, I can tell you that right now, it’s all “hot”.