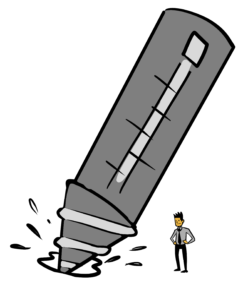 Nerd alert: when I was a kid, a movie that stuck in my mind was a schlocky 70’s film named At The Earth’s Core, starring Peter Cushing. It was filled with strange monsters and such, but one thing that really piqued my interest was the giant “drill” type vehicle they used to get there. My friends and I, after seeing this movie on TV, wanted to buy one.

Little did young Fletch know, but years later, he would have a hand in financing a similar machine. Ok, it doesn’t drill to the earth’s core, and it’s not a ship/vehicle, but a Horizontal Directional Drill has a very similar function.

Horizontal Directional Drills bore into the earth, creating a path for pipes and similar, without the need to dig from the top down. In other words, they bore into the ground on a horizontal / angled path. This means the earth above it can remain undisturbed. So when I got my first application to lease a horizontal directional drill, my first thought was “wow, that’s cool”.

Horizontal Directional Drill financing matters because of the specialized nature of the tool. It’s not something that’s used in every situation, but when you have a job that requires it, it’s indispensable. To give an example, running wire conduit under a major road. Closing the road and digging a trench top-down may be impractical for many locales, so a horizontal directional drill is used instead. This allows the conduit to be run with no disturbance to the road (and with far less work as well.)

But again, it’s not used all the time, so buying it outright could prove taxing to a company’s bottom line – but leasing a horizontal directional drill allows the payments to be spread out over time,  making it much easier to acquire this very-necessary piece of equipment. And, of course, it’s handy to have if one feels the need to go to the center of the earth – if I see an application for that, I may just sign up!!