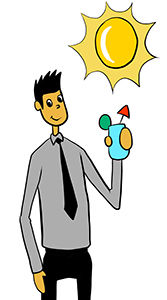 August is a great time to finance equipment because many companies are still in a summer slump. In fact, it may be even more pronounced in August because now the July numbers are in, and they are soft for many industries. So there might be some deals out there.

Section 179 is climbing higher in these posts. If you finance equipment now, and take the Section 179 deduction, there’s a very good chance you’ll pay less in payments this year than the net dollars you will keep from taking the deduction. Read that again if you must, because it’s an “in the black” statement that makes the company accountant smile.

Here’s another reason: your company may have some grand plans for when everyone gets back from their summer vacations. Financing equipment in August means the stuff you need will be ready for rollout. Nothing like going into the fourth quarter with all systems go.

Last thing – I mentioned a month or so ago that “next year’s models” were starting to arrive. This trickle is starting to turn into a flood, and means two things: The latest and greatest is becoming available, and now “last year’s models” (technically this year’s) are in the way. More deals!

So enjoy a glass of lemonade in the summer sun, and look into some August equipment financing, because it’s a good thing.