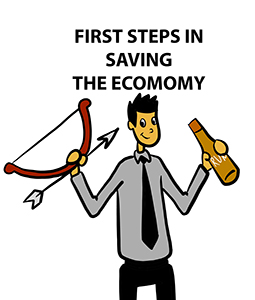 I’m afraid we delve into politics again, my friends (I’m sorry,  I just seemed to have heard this statement a lot.) And I have to admit, I’m a little riled up.

As you know, I’m a champion of Section 179 and I think it’s the best tax incentive for small business of all time. And I love how it was enhanced for 2008 with the passage of the Economic Stimulus Act of 2008. So when the economy started melting, and our leaders started talking about bailout, I thought for sure, in fact I was absolutely certain that Section 179’s nice new limits would be extended into 2009. I mean, this is so obviously a good thing, there’s no way the ‘smart’ people of congress could miss it.

Those of you who are laughing at the inclusion of the word ‘smart’ know where I’m going with this. No, my beloved Section 179 didn’t make it in because Congress was too busy looking at other ways to help businesses. Here are some of the things included in this bailout bill:

The thing that really gets me about this is this was supposed to be a BAILOUT bill. This was a serious emergency and what do we get??? More of the same oh, this little part benefits my state, and I won’t vote unless it’s there.

Extending Section 179 made it into at least two early drafts of the bill, yet how they ultimately dropped extending Section 179 and kept the above earmarks in there is beyond me. So you know what that means, people, don’t you? At this writing, it looks like the higher limits will likely end, have you been eyeing that new piece of equipment? Well, get it now, my friends (there I go again!!… wait where have I heard THAT one before?)