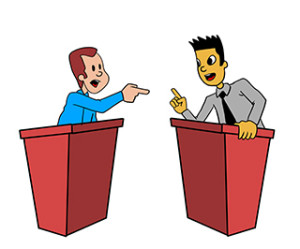 So let’s pretend I’m sitting up there with the presidential debate moderators. Or, if you have a hard time picturing me there, pretend I snuck in (this is far more likely) and get picked to ask a question for Barack Obama and John McCain to debate. What would it be?

Perhaps some intricate question on the socioeconomic challenges facing us?

Or some question related to gas prices?

Or maybe some foreign policy question, because, as you know, I’m rather worldly (stop laughing).

Truth be told, it would be none of those. C’mon – if you’ve read here at all, you know I’m about as stereotypical as a finance/tax guy can be. So my question would be related to Section 179 (big surprise there.)

Specifically, it would be “As President, would you change the vehicle deduction rules regarding Section 179?”

I would ask that because I personally feel the rules for Section 179 in relation to vehicles are antiquated. I think the limit increases that came about with the Economic Stimulus Act of 2008 are a move in the right direction, but the vehicle rules are silly.

Currently, a business can deduct almost any piece of equipment under Section 179. But as far as vehicles go, the vehicle has to weigh 6,000 lbs plus. This means the only ‘everyday’ vehicles that qualify are large SUV’s, Hummers, etc.

Now, on the surface, I understand this. We don’t want people just starting any old business and then writing off their personal car. I get it.

But you know; the world has changed. With computers and the internet, so many people have started to work from home companies – legitimate work from home companies. I personally know a copywriter, an accountant, a business consultant, and a marketing dude (that’s what he calls himself) who all operate legitimate businesses out of their home, and use their car extensively. In fact, they use their car for business as much as someone with a delivery van would. So why should the delivery van get Section 179 consideration, but not the consultant (or the marketing dude’s) car? It makes no sense.

Again, I realize we don’t want every Amway distributor or part time babysitter out there claiming their car, but let’s get real, there are plenty of legitimate businesses out there that deserve this consideration. Maybe make the business have to gross 50k before their vehicles can qualify for Section 179 or something like that.

Anyway, that’s my question. Hopefully I can get it out before the Secret Service throws me out.