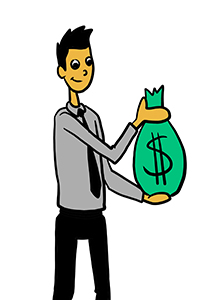 Not that congress asked for my assistance or anything, but as an equipment financing guy, I do have my ear to the ground when it comes to the economy. In fact, I’m right there where the rubber meets the road – small to medium sized businesses buying equipment… in fact, you don’t get a much better economic barometer than that. Every day, I talk to the people who truly drive our economy – the owners and managers of these small to medium sized companies.

So with that in mind, this post is a shout out to an old friend that I feel would stimulate the business economy quite a bit. And that’s bringing back the ITC, or “Investment Tax Credit” for equipment and software purchases. According to me, this has a few things going for it:

1)     Tax cuts are needed to spur the economy. Trust me, the biggest fear of small to medium sized businesses is more taxes, and more red tape. That’s what’s causing them to hold their money now. Eliminate that threat, and you’ll see more spending.

3)     In terms of politics, this is a no-brainer. If there was ever a bipartisan issue, this is it. Introduced by Kennedy in 1962, the ITC was repealed during the Johnson Administration, brought back under Nixon, repealed by Reagan, etc etc. It’s “non-branded”, so to say.

And it’ll help… here’s what was said about it in 1962: Congress agreed “to encourage modernization and expansion of the Nation’s productive facilities and thereby improve the economic potential of the country, with resultant increase in job opportunities and betterment of our competitive position in the world economy” [U.S. Congress, Senate, Committee on Finance, 1962, p. 11].

Over time, the ITC has ranged from 5% to 7% to 10% of the equipment and software cost off income tax liability. That’s a straight credit, folks – businesses like that.

I’m not an economist (as my checkbook wielding wife keeps reminding me), but I think this has a lot of merit. Bring back the ITC.

This is an addendum I’ll be adding to some posts. But it’s getting later in the year, and Section 179 as we know it may not be around much longer. If you want that new piece of equipment, NOW is the time. Maybe next year, we’ll see Section 179 and the ITC – that would be nice.