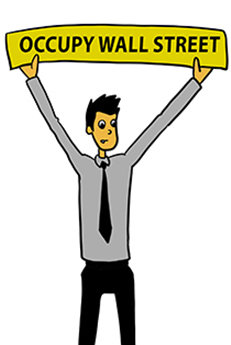 Leave it to me to see a connection to equipment financing from pretty much any news story.

In hearing and reading about occupy Wall Street and other protests, it struck me that a lot of what the people are saying is we lost “good jobs”, and that they want them back. I totally get that sentiment, but I do fear it’s misplaced – those jobs are not coming back. Let me explain why (and tie it into equipment leases and the like.)

See, there was a time when assembly line work and factory jobs paid well, because workers were needed for them. But that was times past, and it’s not coming back. Why? Two reasons: the first is, global labor is cheaper (and we can go on and on about that – no opinion here on whether that’s right or wrong – I’m just saying what “is”.)

But the second reason is one I saw coming a MILE away – the amount of labor that was needed years ago is simply not needed anymore. Bigger and better robotics and manufacturing machines have replaced thousands of workers. Where it used to take ten people to run the machines to make a widget now likely takes one person (whose job is to turn a bigger machine on or off.) And through computers, that one person can probably run ten such machines.

I know about this because I finance equipment (well, my company does). I see what’s happening out there, and what’s happening is companies are leasing equipment that does jobs that once took ten, twenty, fifty (etc) people to do. Now again, I am not saying that this is a good thing for everyone – it just “is”, and is something that we have to get used to. Because if you owned a manufacturing company, would it not make sense to buy or lease equipment that makes producing your widget easier (and more economical?) Of course you would.

And that’s about as political as old Fletch gets!