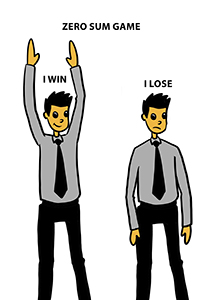 I think of odd things sometimes. For example, this is what I thought about my last time at the gym:

Oftentimes, one will hear somebody equate the economy to a “zero sum game”. For those unfamiliar with the term, a “zero sum” anything basically means in order to gain, someone else must lose.

Think of a cake or a pizza: say you plan to divide it into eight equal pieces, but you actually mis-cut the first piece and it’s a little bigger… oops. Not only do you have big piece, but now another piece (or several, perhaps) *must* be smaller than originally planned to make up for it. Zero sum – someone wins with a bigger piece (hopefully me), and someone gets cheated (not me.)

Some people like to say the economy is a zero sum game (probably because Gordon Gekko said stocks were in “Wall Street”). Someone wins, so someone else must lose. But that’s really not true – economics are far too complex to have a simple “sum” – the overall cake simply changes too fast to have a definite value.

See, I noticed the gym has been getting more crowded than usual in the past few months. Now, why would that be? Maybe because the gym I go is the most competitively priced gym in town. In fact, it’s so competitively priced that it almost makes more sense to just get a gym membership than buy a piece of exercise equipment for your home. Plus, it’s a fairly cheap “activity” – for less than 15 bucks a month, one has access to all the equipment every day, massage chairs, tanning, etc. So in a bad economy, my small observation told me more people are going to the lesser priced gyms.  Which means more are probably opening up.

Something goes down, another goes up. Interesting.

Maybe I should drink more water on the treadmill???