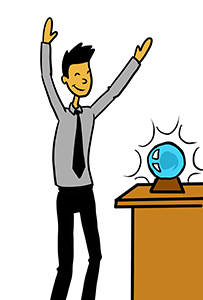 If you follow my blog here at “The Lease Guy”, you know Fletch likes to predict things every January. Of course, none of my predictions come true, but hey, that’s just semantics. And as Mrs. Fletch will attest, I am a stubborn guy – one of these days I will get it right. So this has nothing to do with equipment financing, equipment leasing, or Section 179 (ok, that last part is false – I do mention section 179 later).

Ok, let’s predict sports first, because we’re all still in a sporting frame of mind. For the Super Bowl, I see… the NY Giants. I know, I know, a lot of you think I’m nuts, and that Green bay or New Orleans will win – I say no, and Eli Manning will throw another crazy pass, and the NY Giants will win. Mark my words.

The NHL will see The NY rangers… I know, a NY double dip (sorry), but I don’t see anyone playing better than they are, and they will have the hot goalie.

In basketball, you just have to go with Miami. They’ll learn how to play together this year and bring it home. And Baseball… I’m going to go out on a limb and predict the LA Dodgers return to glory this year.

We have a HUGE political year this year – it’s time to elect a new President. I did not predict the last election, and I won’t this one. I just don’t get too involved with politics. But ok, you look to me for advice, so I’ll say something here: a republican or a democrat will win. I’m “all-in” on that one.

The Mayan calendar predicts the world will end on 12/21/2012. I’ll go out on a limb and say I disagree. But I will say that I predict “some” kind of earth-shaking event. We’re getting close to finding some type of microbial life on other planets – maybe that’ll be it. Or some kind of discovery. But there will be “something” big.