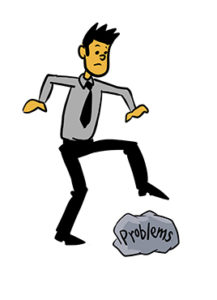 I get questions all the time regarding why lenders don’t like specific industries or business types. It’s a touchy topic, because basically, there’s no way around talking about stereotypes and hurting people’s feelings. If I say “industry XYZ has a high failure rate, and therefore is a bad credit risk”, to people IN industry XYZ… well, you just called them all failures and poor credit risks.

Nothing could be further from the truth, of course, but I’d be lying if I said the overall performance of any industry did not affect the credit risk associated with such. It’s the same way an insurance company will use neighborhood, a driver’s age, a person’s health history, etc. as partial risk factors in underwriting various policies.

Again, before I list any industry or business circumstance, please remember this is not personal, nor is it any indication on the individual reader. It’s simply tables, matrixes, and algorithms.

Because it’s such a huge search term, I’m not going to actually write the common term for this type of business (it’s the word “start” followed by the opposite of “down”). But the numbers associated with such are staggering. A full 80% will fail within just a few years, for a variety of reasons. That makes new businesses a poor credit risk. The other factor that is somewhat obvious is credit decisions are made by evaluating a company’s credit, and by definition, a new business has none.

This problem is made worse by the media talking about lenders “helping” new businesses, and a few urban-legend type success stories. Where some bootstrap entrepreneur borrowed $$ and turned it into a multi-billion dollar company. What they leave out is how that money was acquired – usually it’s venture capital, and said entrepreneur gave up a ton of upside. And the venture capitalist profits by spreading investments over many companies – it only takes one hit to make it all worthwhile. But banks and other lenders are not in the business of venture capital.

So no new businesses. My advice is to find an Angel Investor / Venture Capitalist, get on the TV show Shark Tank, ask your rich uncle for money, or use credit cards.

Restaurants have one of the highest failure rates imaginable. If you are talking about new non-franchise restaurants, 98.3% will fail or be at or near technical insolvency within the first five years. You read that right – not even two percentage points shy of 100%. Think about your own town – how many “brand new” restaurants made it five-years plus without a name change, owner change, etc? Most likely none, and if one did make it, a ton of others came and went. How long has your best local pizza place been in business? Probably decades. Breaking into this industry, and gaining a five-year foothold, is colossally hard. So the reality is, any restaurant has to be looked at through these numbers.

There’s another credit issue with restaurants that’s related to this high failure rate that affects even long-standing restaurants. You see, most loans are partially secured by the equipment itself. If a borrower doesn’t pay, the equipment can be repossessed and resold. But because sooo many restaurants fail, there is almost no real value for used restaurant equipment, because there’s so much of it on the market.

One last thing on restaurants – even long-standing eateries can fail quickly. Tastes change, signature chefs move on, etc. The public is fickle when it comes to eateries, as any successful restaurateur will attest. But it makes lenders simply avoid the industry in general.

Trucking is an extremely volatile, highly-regulated industry with very thin margins. Any owner operator will tell you how razor thin they are. It makes for a situation that churns drivers. For every long-term owner operator that runs a successful business, there are 50 that go in and out of business due to how tough it is to make a living. And not being home every night doesn’t help.

I wish the industry would pay better rates so these folks would have an easier time making a go of it.  But until that happens, owner-operators and over-the-road trucking companies are industries lenders avoid.

I recently did a few posts about retail, and it’s the thing that made me think about this in general. The internet is crushing retail, and a few big online players are crushing many smaller online retailers. So it’s become an industry lenders generally look to avoid.

For the above businesses, in terms of getting a lender’s attention, probably the only thing that carries any weight is collateral that covers the loan. I know, I know, if you had collateral, you wouldn’t need the lender. But simply look at it from the lender’s point of view. And their point of view is hard statistics, not the emotional excitement of a new business.