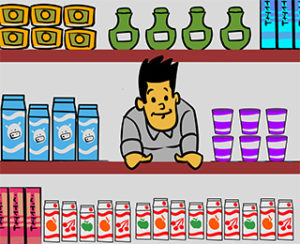 I’ll be writing two posts on brick and mortar retail businesses, and how they are faring in the world of online shopping and big box retailers.

This came about from a conversation I had last week with a local retail business I’ve always frequented, and know the owner. This particular business is a small, local pet supply chain, but for purposes of this post, it could be any brick and mortar retail business.

The store owner told me that yes, while online shopping has cut into his business a little bit, it was the big box retailers that hit him the hardest. But he was in the middle of a two-year plan to combat (and at the same time, be more like) both. And his plan started with how his stores looked.

See, when the big box store came to town, and sales took a hit, it caused him to take a good hard look at his establishments. And he noticed that yes, his stores were lacking in terms of look. Where the big box stores all looked shiny and modern, his fixtures and displays were right out of the 1960’s, when his father ran the company. Nobody really noticed this until something better came along – not the customers, not the owner – nobody. But once shiny new Big Box was in, it was clear this local chain needed an upgrade.

So my owner friend financed new shelving fixtures. Everything – the shelves, the display cases, the checkout counter – all of it got replaced. Part of the cost was offset by selling the used fixtures to local businesses just starting out, but the majority was financed.

I have to say, the place looks great, and it looks like customers agree – the sales drop-off due to Big Box has leveled off, and even come back a little. Not that new shelving will make anyone come through the door in and of themselves, but the “better look” definitely doesn’t drive them away (like “looking old” will).

Plus, when you add this new look to the better service a local store can provide (indeed, at any given time, these small stores have as many cashiers working as big box), and you have a situation where the little guy can indeed compete.

And now that the place looks great, they are in phase two of the plan, which I’ll talk about in my next post.