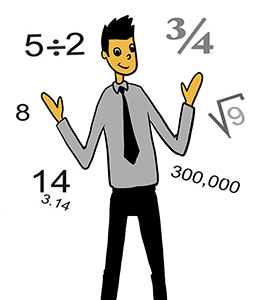 With the title Equipment Financing Approval – by the numbers you might think I’m going to give industry approval ratings in terms of equipment financing deals (which, by the way, are higher than our president’s approval ratings!)

But I’m not – in fact, as an overall number, the amount of businesses accepted is not very useful (there are just too many factors involved.) What I AM going to talk about is the fact that equipment financing approval (or denial) is generally based on numbers, and not emotion. It’s really the only way we – as an equipment financing company – can do things.

This all came about in my head from a recent post on vendor-lender equipment financing relationships. Specifically, the post on vendor recourse programs. The general gist of the post was it’s a relationship where a manufacturer assumes some risk because they feel it’ll be profitable to them. Perhaps it’s because they feel they will move enough product to offset any defaults, or maybe they know their industry well enough that they think their product will help customers bounce back, etc. Either way, in this relationship, they accept some risk that we will not.

Think about that last statement for a second… my equipment financing company, simply from looking at the numbers (years in business, income, liability, credit history, etc) will say “no”. But the vendor wants to step in and say “yes”.

Sometimes, they say “yes” due to margin – they make enough profit on the sale that the “default rate” won’t matter. That’s ok – it’s still going by the numbers.

However, other times, it’s not. Instead, they feel their customers (or their industry) will buck the normal trends and default at less than the predicted rate. They are going by MORE than the numbers – they are going by emotion. Which, as a lender, I can tell you is a pretty bad way to go about things. It’s like loaning money to your brother-in-law to get his impounded car back… how do you think MOST of those transactions worked out?

Now, I’m not saying this is necessarily bad, mind you. But if you lend money to people whose numbers say “don’t lend”, they will almost always default at a fairly predictable rate (yes, shockingly, even brother-in-laws with impounded cars!) I mention this because I can’t tell you how many times I’ve seen a vendor recourse program result in the vendor being “surprised” at who doesn’t pay. But the numbers don’t lie.

This doesn’t mean we never put emotion into a decision – sometimes, you just have to go with your gut. But some thought is definitely required in figuring out which brother (in law) we can spare a dime to!