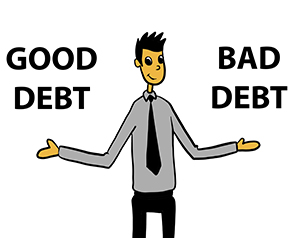 Being that I work in equipment finance, I need to clear a little something up in regards to debt: Regardless of what you hear on the TV and such, debt is not evil, debt is not bad, and debt is not responsible for the economic slowdown.

At least not good debt.

Bad Debt (for lack of a better term) is debt that does not relate to the bottom line or production. Now, the name is a misnomer, because the debt really isn’t bad. But it’s not essential in making money. So in slow economic times, this type of debt is indeed bad (hence the name). A good example is borrowing money to re-do the cafeteria area. While that’s a nice thing to do, and certainly a worthy way to spend money, it might not be the best choice of projects in an economic downturn.

In a slow economy, a smart company will look to increase good debt expenditures, while decreasing the amount of bad debt it takes on.

Now I can hear the question, why would ANY debt be good in slow times?

The answer is simple: It’s in slow times that companies separate themselves from each other.

Think about this logically, in good times everyone has gobs of money to spend.  Remember the dot com bubble, where companies that just mentioned the words ‘streaming online applications’ were given tons of cash to spend? It wasn’t until the crash that the real players emerged. These companies actually spent money during the dot com bust, and came out of the dark times stronger for the experience. But the pretenders that largely spent money on game rooms and employee lounges didn’t emerge at all.

A strong company that upgrades its ERP system, or buys new production equipment, or takes on a new marketing guru during tough times actually comes out stronger in the end. Good debt can even pay for itself (or come close to doing such) right away sometimes financing equipment to get more efficient is a no-brainer if the efficiency savings are greater than the finance payment. This happens all the time.

So again, debt, in and of itself, is not bad. Just make sure your debt is good debt, and you’ll be fine.