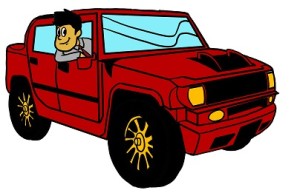 It’s funny – all this time I’ve been writing about Section 179 and equipment financing, and I never really explained why Section 179 is sometimes referred to as “the Hummer Tax Break” (even though I’ve called it that numerous times here.)

Way back in the early 90’s, a civilian version of the military’s “HumVee” was made available. And it’s big. Real big, coming in at over 6,000lbs. Then GM bought the company that made them, and really started mass producing them in 1998.

So why was this special? Well, first of all, it’s a giant vehicle. But second of all, it created a loophole allowing people to “write off” their personal vehicle under Section 179.

See, Section 179 was meant for businesses and business vehicles. Not vehicles you take to the mall. So when the tax code was created, a 6,000 lb GVW (gross vehicle weight) was instituted. This was sufficient at the time, because there were no passenger vehicles that big (that’s three tons, folks). Then the Hummer came along…

Savvy consumers caught wind of this. Many people reasoned, “hey, if I need an SUV anyway, why not buy one a little bigger and get a sweet deduction?” So Section 179 became known as the “Hummer Tax Deduction” or the “Hummer Tax Break”.

Fast forward a bit – other vehicle manufacturers caught wind of this, and started producing their own massive SUV’s. And today, they are everywhere. In fact, I’ll bet there are probably 40-50 models that qualify for Section 179.  And oddly enough, none of them are Hummers (new ones, anyway), as production was ceased in 2010.

As of now, the 6,000 GVW is still in force, and to get the deduction, the vehicle must primarily be used for business (you get the % you use it for biz).

You are using it for business, right?