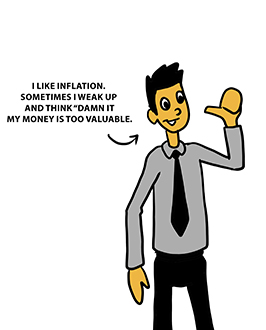 Ok, before I go into this post, I want to make sure we all understand something: I do not have anything to do with the economy or interest rates or the like.

All that said, I usually do have a pretty good handle on the economy (it’s part of being an equipment finance guy, after all). So I feel pretty comfortable about making the following prediction: Inflation is coming. A little bit, anyway.

We’ve had a loooong run of very little inflation, and we’ve had low interest rates for years and years. But it’s becoming pretty evident that it cannot be sustained, and inflationary pressure will begin to gain steam.  Here’s why:

Now while I see the above as almost a given in 2011, it is not a cause for alarm. I definitely think it will be a controlled increase, as not to derail the (very) slow recovery we are on. And in a way, a little inflation might be good – inflation has always been a normal part of the economy, and running away from it is probably not the smartest thing in the world to do – at least long term.

And besides, inflation is also sometimes good for businesses, which I’ll discuss next time. Now, let’s see what I have for lunch today…