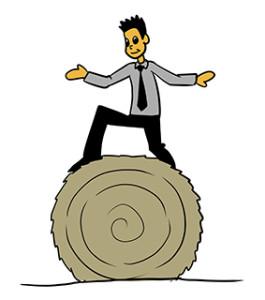 Strange title – I know. You’ll understand in a few. First, let me get out my straw hat and corncob pipe…

Every year around this time, Willie Nelson and Neil Young do their Farm Aid concert, and being a fan of both, I usually watch the simulcast (and attended a few years back too – that was fun.)

So when I see advertisements for the yearly concert, I think of farmers, especially smaller, family-type farmers. The type that really depend on the price of crops and similar. These guys definitely have it tough, so I’m happy Willie, Neil and the rest do this.

This year, I also had the pleasure of attending a trade show where farm equipment was sold. I talked to both buyers and sellers quite a bit, and something interesting came up – farmers are fairly upset at the low prices of corn and grain, and it’s affecting what equipment they purchase.

So why is this?

Well, I’m no economist, but it probably has something to do with the fact that while both crops have demand, corn is traded on the futures market, and hay is not. This makes the price of corn far more volatile. And since we are talking about things that have to be grown and harvested, not to mention having a fairly finite shelf-life, it’s probably smart for the farmer to direct his or her efforts to a crop that they can get a more predictable price for – hay**

**I say I’m not an economist, but I know that increasing hay supply will lower the price paid, but from what the farmers say, and from the machines I’m seeing being sold, the variance is not as revenue-hurting as the lower, and more volatile, corn prices.

So these farmers are clearly shifting gears, and growing more hay as a cash crop until corn and grain prices come around again.

I don’t know how I feel about this – usually, I don’t get too worked up over regulations, government policy (save for Section 179, of course) or similar, but this is our food supply we’re talking about. I won’t go all Willie and Neil on you about GMO’s and the like, but it seems somehow wrong when farmers will grow food largely used for animals (hay) over corn and grain, due to the price making it not worth it to grow corn.

Either way, I will enjoy Saturday’s BBQ’d corn a little more, because I know some sweat equity (and some hand wringing over price) probably went into it.