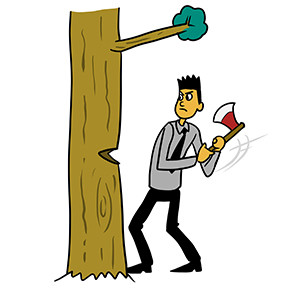 I just had a tree removed from my yard yesterday. And, while the crew was working, I chatted with the owner of the company a little bit. The story he told me about how he started and grew made for a perfect post here. So let’s talk about financing tree removal equipment / leasing bucket trucks (or boom trucks, if you prefer.)

The company removing my tree started about 30 years ago. It was two guys: the owner I was talking to, and his brother. They started like many other companies start – small, with a lot of sweat equity. In their case, the sweat equity meant actually climbing trees to trim / remove them.  I know I climbed trees for fun as a kid, but wow, climbing with a chainsaw and cutting from the top down piece by piece is not something that seems easy. But that’s how they started.

Fast forward a few years, and the brothers saved enough money to buy a cheap bucket truck. Financing such was not something they thought about, so they paid cash for what amounted to a “pretty rough” truck. It was also small in terms of the height it could reach. But it signified growth, and indeed, now they could work much faster, and ended up hiring another man or two.

More money saved = another small bucket truck. They still didn’t finance… we’re now going on a decade of saving and very (very!) slowly growing. But now they had two trucks, and could have two crews working.

That led to more growth over the next few years. This time, they wanted a crane, and felt they were successful enough to talk about financing a crane. They did such, and the company really started taking off. More vehicles / machines followed, all financed.

This is a classic story of growth, but it could have been made even better. Right about the time the company was looking to buy that second non-financed bucket truck, they were almost certainly strong enough to work with a company like mine, as we lease bucket trucks all the time (something I told him, of course). In fact, they probably could have leased both a truck and crane right then and there, and experienced growth a lot faster.

And that’s the case for financing tree removal equipment / leasing bucket trucks and cranes, and similar. But you could substitute almost any type of equipment and come up with the same story.